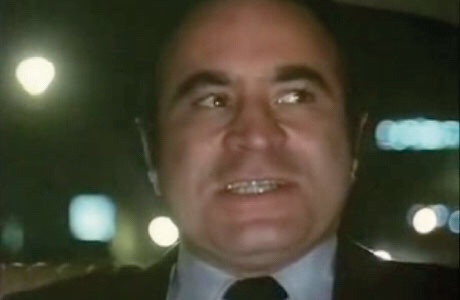 Holding a baby as I type so I’ll be keeping this one brief. I chose Francis Monkman’s wonderful theme from The Long Good Friday.

Monkman was part of the prog rock band, Curved Air. Also during his career he has worked with The Shadows, Elton John and Brian Eno. His theme has an icy coldness to it that builds tension but never releases it.

I’ve included the final scene of the film, from 1980. Though it’s the last scene of the film, it was the first scene to be filmed. The Director, John MacKenzie was driving the car, telling Bob Hoskins the events of the story to come and filming his reactions. Because of this, the scene had to be muted and Monkman’s score put over the top of it. The scene also features a first credit for 25 year old James Bond actor, Pierce Brosnan. His part was filmed later, minus Hoskins, with the director in the driver’s seat once again.

As a result, Brosnan had no idea how cinematic the scene would end up being when it was all stitched together. All he did at the time was his “best smile of malevolence.”

Hope you enjoyed that. I’ll be back next week something from somewhere else.

Thanks for reading and listening.

If you feel like some more music, then please check out some of my other Monday Music posts. They’re packed with great examples of music from movies, TV and other places.