I went to New York in August of 2006.  After many trips to the USA, I finally made it to the city that never sleeps. My ten days there convinced me that it’s the most exciting place in the world that isn’t called London.

I arrived in the midst of a heat wave with temperatures hitting 40 Celsius. I got myself a Yellow cab from JFK airport over to the Youth Hostel on Amsterdam and 103rd.  You can check it out here: http://hinewyork.org/ It’s been renovated since I was there and I bet the showers have been upgraded (they needed to be). Still, it was in a great location for the Subway and the facilities were really good. I was too early to check in so I dumped my bags and went out for a walk.  I had the idea to walk down to the bottom of the island and see the Statue of Liberty, seeing what I could see along the way. The heat was intense and I had to stop for a new bottle of water every few blocks. When I made it to 34th and got the icy cold blast of the air conditioning through the doors of the Empire State building, I stopped for a chat with the doorman and then pushed on. I had the idea that if I kept on going, the when the numbers of the streets got down to 1, then I would be at the bottom of Manhattan. As it happens, that’s not how it works. There are so many streets after that as you make your way finally to South Ferry and a view of Liberty Island.

On the way, you pass by Wall Street and Trinity Church and all sorts of other sights. Everywhere you turn, there’s some location from a film you’ve seen. Within a stone’s throw from 5th Avenue or Broadway, there’s the courthouse from 12 Angry Men or Grand Central Terminus. I really do recommend walking around rather than getting the Subway all the time.  Just like getting the tube everywhere in London, you risk missing many interesting sights on the surface.  That’s not to say that the Subway isn’t useful. I found it very good for getting around as I learned the layout of the city better. 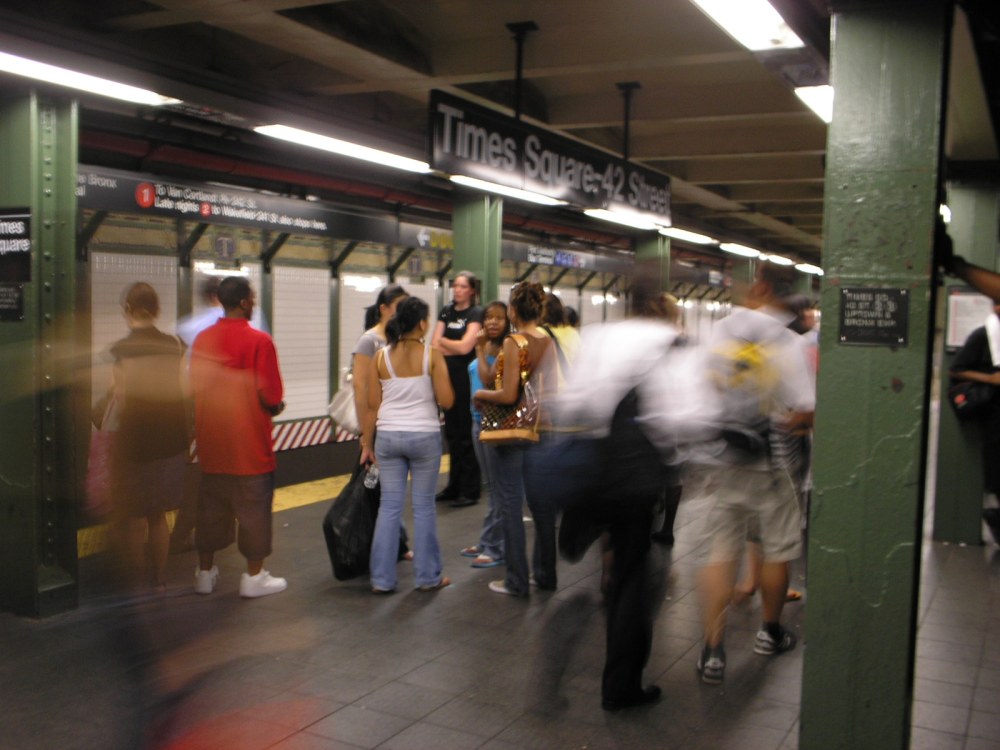 The time I spent in New York was jam packed with trying to fit in as much as I could. Even ten days doesn’t really give you enough time to see everything. I never actually made it to Liberty Island. That picture above is as close as I got. The first day I got to the Empire State Building as early as possible to avoid all the queues. 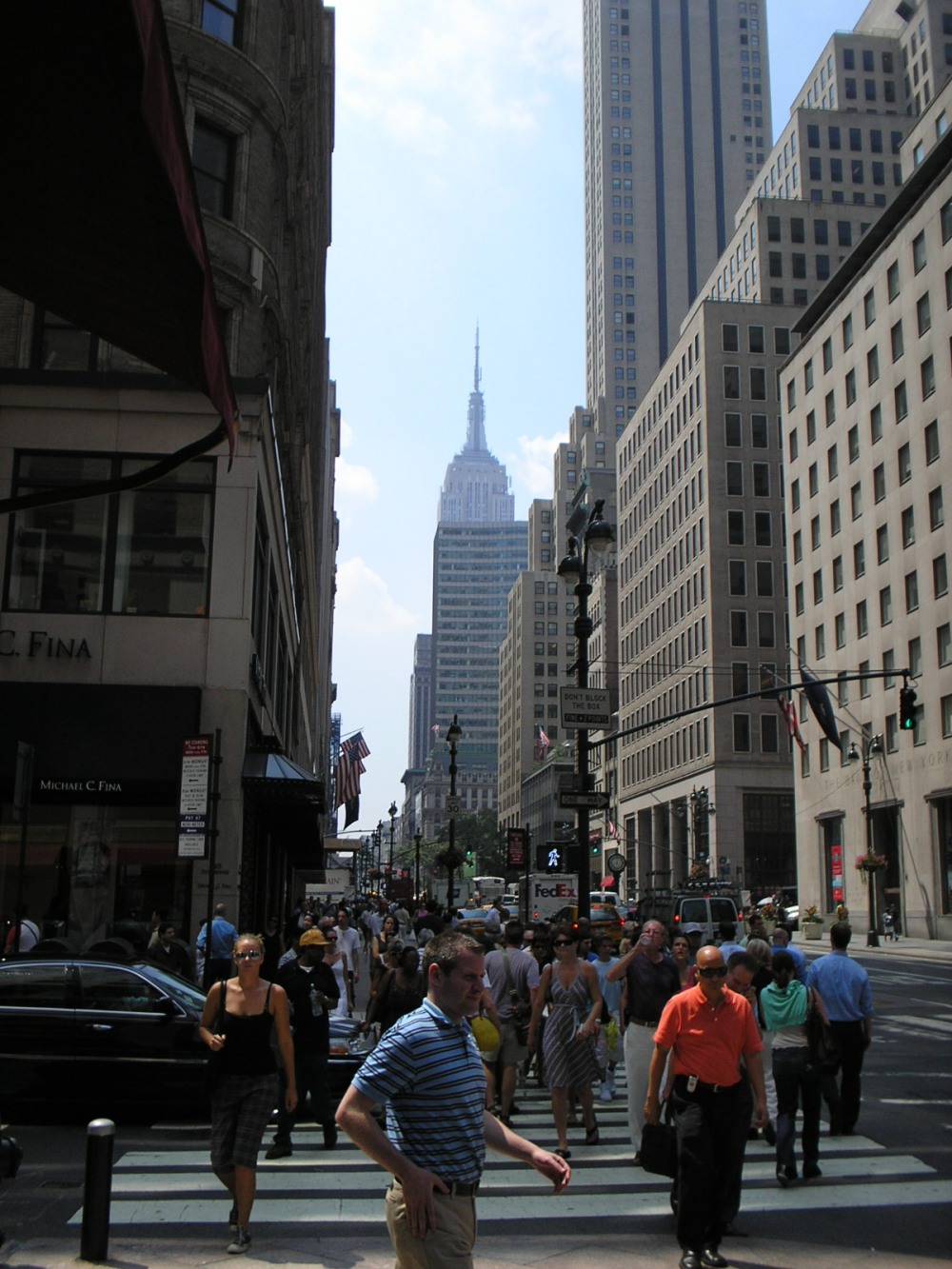 I shelled out the maximum money to go all the way to the 103rd floor. In hindsight, I probably wouldn’t bother. The windows are thick and nearly opaque at the top and you can’t get a decent picture from there. It’s much better from the standard observation area on the 87th floor.

The rest of the day I spent at MoMA (Museum of Modern Art) which was an amazing experience. As I sit here, I’m remembering all the different things I managed to get done whilst I was there and there are so many:

The Metropolitan Museum (So worth it – I was in there for HOURS. There is so much to see. I think it’s my favourite museum in the world)

The United Nations (took the tour – well worth it)

Times Square (here’s me – I got approached by some dude outside the record store who tried to sell me his CD – “Yo man, check ME out.” I thought about it for a bit and then agreed to pay $5 for it. I’d bought a guy’s CD in Seattle and it was really good. This one wasn’t!  Plus, no sooner as I’d got my money out, about a dozen more budding musicians appeared from nowhere asking me to check THEM out)

Coney Island (lovely day by the beach with some Nathan’s hot dogs – back when I ate meat – and a trip to the New York Aquarium. I wish I’d been feeling better when I went there.  I’d been out the night before – to a nightclub in Midtown – with some Mancunians who were staying at the hostel.  I spent most of the time at Coney Island waiting for my head to clear.

The Natural History Museum – with a blue whale just like ours!

I also got to see my favourite band play live on Randall’s Island. Getting back afterwards was a bit of a nightmare. The island was closed off and I couldn’t walk back the way I’d come, so I had to get on a bus to the Subway at 125th. I then had to go down on one line all the way to somewhere I could get across town. That’s the only problem with the Subway. if you want to go up or down then you’re fine. Getting across town is not so easy. I think I ended up getting a cab in the end.

I spent a day shopping, mostly looking for a pair of boots for my friend. I went to the cinema and saw Clerks II and stopped in at the Yankees club shop and bought a T-Shirt.

I also went to Trump Tower (back when he was just another harmless misogynistic TV star) and went on a tour of the New York Stock Exchange.

One day I took myself off on the bus down to Philadelphia so I could see the Liberty Bell and run up the Rocky Steps.

There’s a great art gallery at the top of those stairs. That’s worth a look too.

There’s just so much to do in New York. I barely scratched the surface and hope to get back there at some point and do some more.

Thanks for reading. If you enjoyed this, then please check out my other entries in the Blogging from A to Z Challenge.