When I started this website, I think one of the first things I wrote was about my life with science fiction and what I used to read and write about when I was young.  I used to love writing stories when I was young. They were usually based on something I’d read or seen on TV.  When I was at Infant school, I wrote this huge story about a cross country motor race. I think I must have watched The Gumball Rally or something like that and it gave me an idea. It had chapters and everything. As I recall, each chapter was about four lines long but I loved it.  I loved creating it as I went.

I remember writing some story about a special forces mission to rescue some people from a jungle stronghold, too.  I remember writing bits of it when we went to visit my Gran.  I don’t know where that idea came from. It’s the first time I’ve thought about it in about 30 years. Probably it came from every Bond film I’d ever seen.

Then there was my science fiction writing in middle school.  I had this big idea for someone who was frozen for a thousand years, waking up in the future to go up against his old enemy.  Someone read my mind obviously and years later there was Demolition Man. I think I wrote that story in Year 8 but I never finished it. We did some big story-writing project in English where everyone had to write a Quest story. They had to do a different chapter every week but I wanted to do my own thing.  I didn’t have a proper plan, however, and the teacher made me stop after a week or so and go on to the quest story instead.  I was upset to say the least, but it did teach me that I needed to plan out my stories better.

I used to love those Fighting Fantasy gamebooks by Ian Livingstone and Steve Jackson too, and I tried to write one of those when I was about 12 or 13.  I had a big plan for that one which I sketched out on a map I got from the book they released to help people make up stories in their world. It was called Titan. 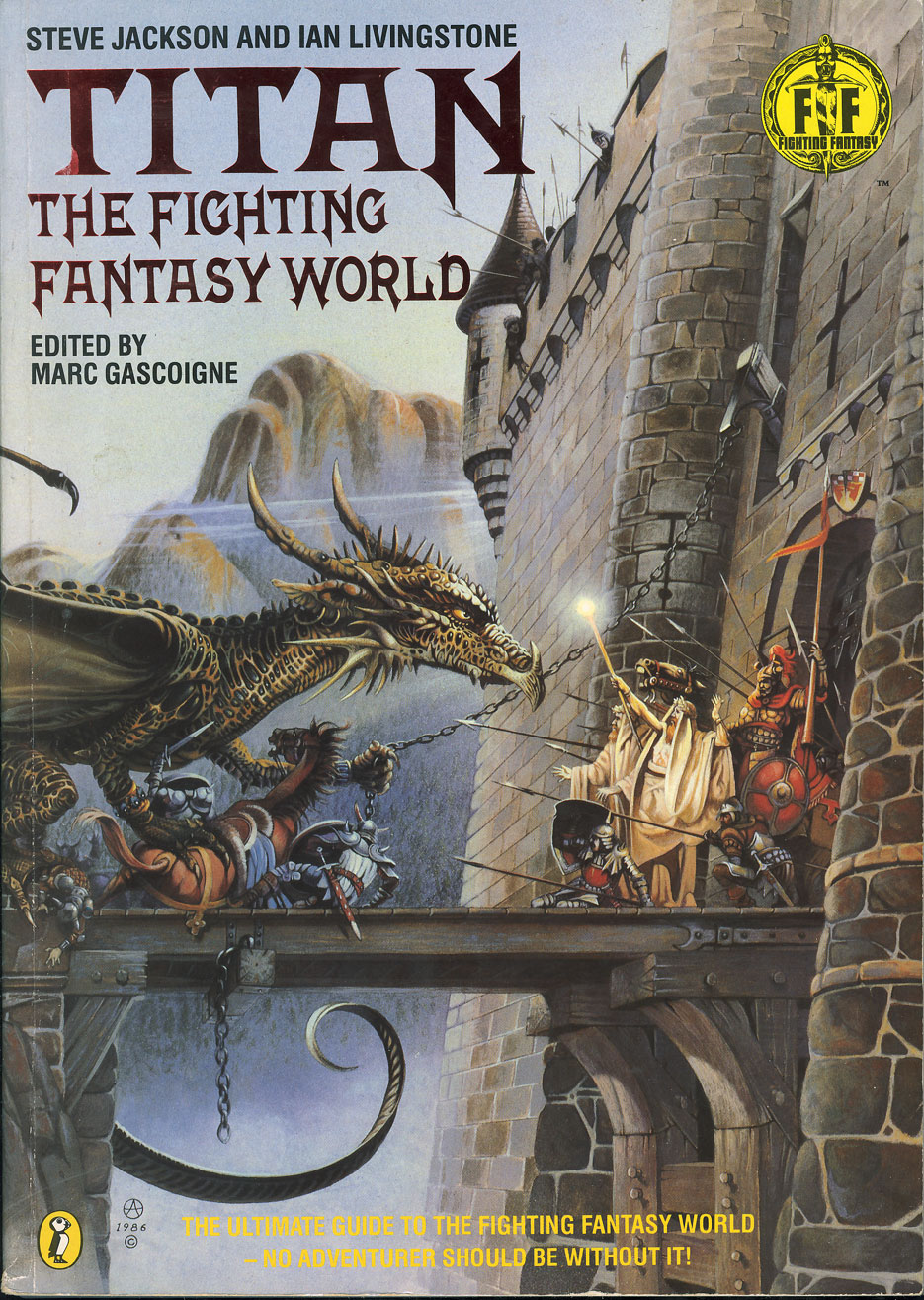 I used it to plan out everything from locations to characters, then I got a big black notebook from my Dad and started to write. I wrote in all the numbered entries and then filled them in as I went with all the different decisions. There was a big map in the book and I think the story was going to cover quite a bit of it. 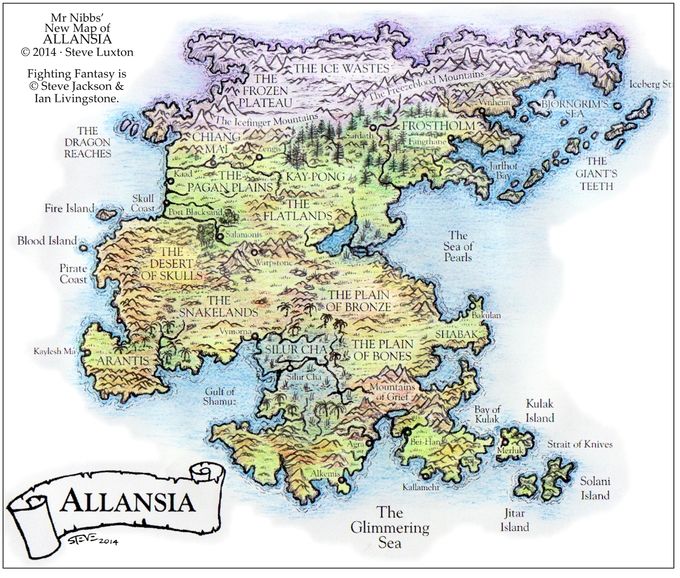 I remember spending so much time on it and getting about a quarter of the way through.  That’s not bad going considering how long it was going to be.  I must have moved on to something else eventually.

When I did GCSE English, I used to love the narrative assignments the most.  We had to write a story called The Outsider once, about someone who was different, and I took a leftfield approach to it. I wrote about the aftermath of a nuclear war (it was the 80s) and how someone from a bunker underground came out to see what life was like on the surface. He was the ‘outsider’ because he was normal, unaffected by the radiation poisoning that had deformed everyone else. Pretty grim. Think I got an A for it.

In my A level English exam, I chose to go for narrative, too.  There was a choice on the paper to write a story: it had to have sunflowers in it, and other things.  I decided to make the sunflowers Van Gogh’s ones. It was a story about an art theft and how the criminals double crossed each other.

When I was at University, I did a creative writing course as part of my English degree. I wrote stories about a massive wasp that terrified someone in their home and another about some tiny cleaning robots that were meant to be the next innovation but ended up eating the owner of the house because they classed him as mess to be cleaned up. I also tried my hand at poetry.

I was trying to write something completely avant garde at the same time. I used to go to the university computer lab, which was open all night, to write it.  It was a story about a demon trying to take over someone’s mind.  It was going to be part story, part poem and part screenplay. I think I got about ten pages into it and then gave up.

After university, I tried to get onto an MA course in Screenwriting but my portfolio wasn’t very good. I didn’t write much for a while, then eventually I got into teaching.

Teaching was a great avenue for me to write for a variety of reasons.  There were plays and stories but I didn’t do much of it for myself.  Well, I guess that’s not strictly accurate. I loved doing it. I entered a short story in the TES competition one year but didn’t win. It was the story of a disgruntled teacher who blows up his school (once he engineers everyone’s absence so no-one gets hurt)

I love working on ideas with children for what they want to write.  At the same time, I finally had a good idea for a story I wanted to write, and that’s how The Crossing was born.  I’d been toying with the idea for a while and not getting anywhere. I didn’t have a main character.  When I made up Paul Armstrong, I knew the rest of it would come together. I finally had the plan I needed to write a novel; something which I always doubted that I would do.

Ever since I admitted to myself that writing was what I wanted to do, I’ve just not really stopped. Finishing the novel was only the beginning. It just cemented my own belief in what I want to do. With this website, I’ve had so much fun writing about the things that I love and not only that. I also now feel more confident talking about the things that I love, which is a pleasant side effect that did not expect.

Since I started, I’ve managed to get my stuff published on Taste of Cinema and I’ve guested on YouTube shows and that would never have happened without everything else.  I should also mention my wife, Serena, who’s given me phenomenal support over the past couple of years in chasing my dreams and doing what I love.

Since I finished the book, about six people have read it, including three people I don’t know.  Everyone’s had positive things to say about it and I can’t wait to get it out to a proper audience next year. In the meantime I’ve written a Twin peaks fanfiction story in three parts, which I’ll be releasing at this year’s Twin Peaks UK Festival.

It’s funny. I’ve been saying over the past couple of years that I enjoyed writing as a child but then gave up on it for ages.  In fact, having written this and remembered all these stories, it would seem that writing has always been part of my life.  I hope it always will be.

Thanks so much for reading.  If you enjoyed this, then please check out my other posts in the Blogging from A-Z Challenge.  you can find links below.  Now I just have to figure out what I’m going to do with X.

V is for Vampires (and Val)

3 thoughts on “W is for Writing”