I’ve been talking for 24 letters and 7 months now about myself and the things that are important to me. Before I get to the end, I thought it would be fun to leave my own opinions to one side and focus on what other people say about me. This is open to feedback too, from those of you who know me or have read any of my stuff here or on Taste of Cinema or anyone who’s seen me talk about Twin Peaks on Obnoxious and Anonymous on the few occasions I’ve appeared.

Where to begin, then? How about going back to the beginning? We could start with my Year 5 school report.  here it is. 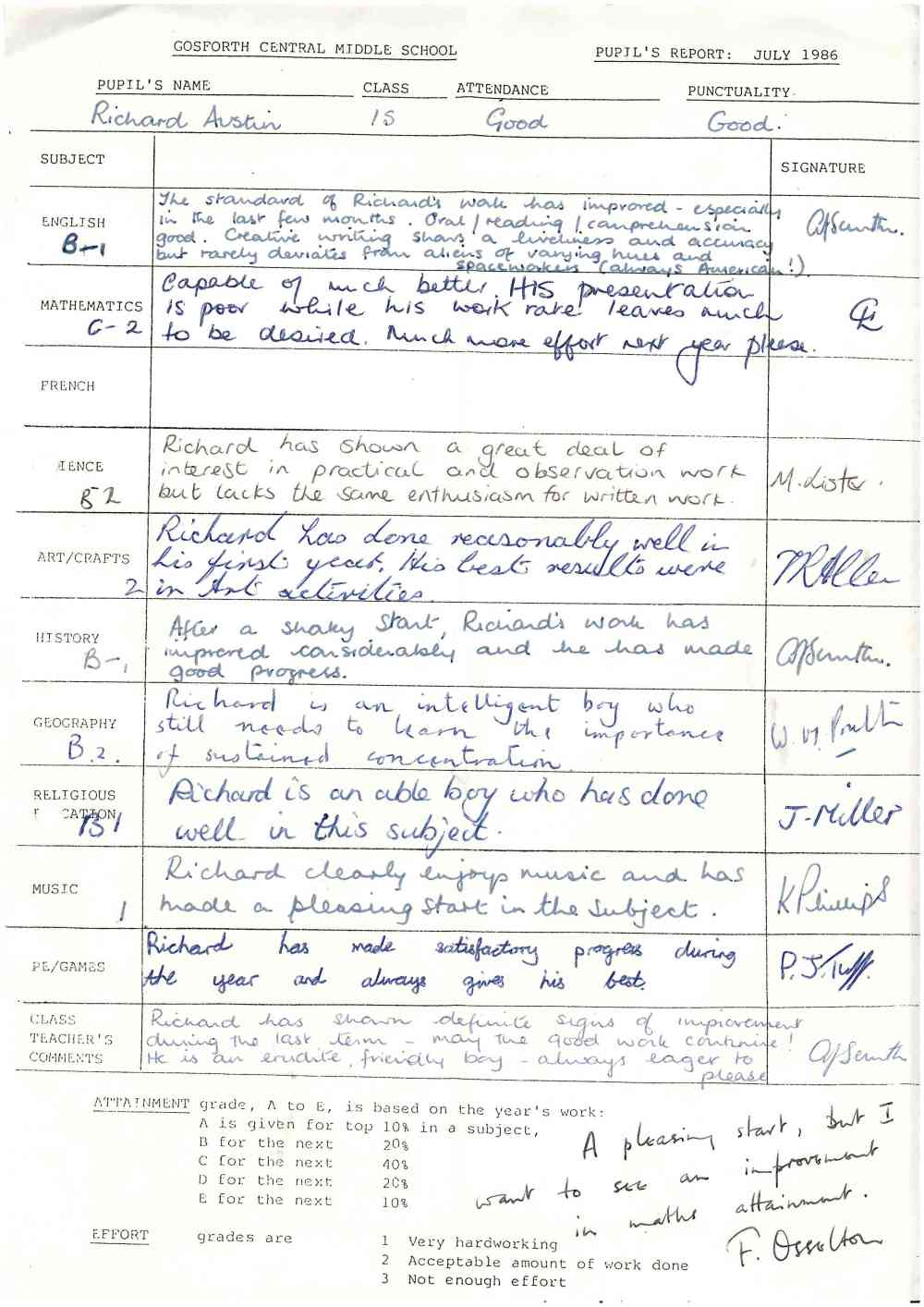 “Aliens of varying hues and spaceworkers (always American!).” – Looks like I’ve always been writing science fiction.  That Maths comment stings a bit. I don’t remember liking Maths that much until I was at High School. I dropped through sets for a while and it wasn’t until I got to High School that I got a bit more confident in it and started to make my way back up.

The evidence is here in my High School Reports.

“Originality and talent.” I’ll take that!  In Year 10, I had Mr Strom and this was his view…

My form tutor was Miss Farquhar.  This is what she had to say…

It’s not all perfect, though.

In terms of my writing, my various posts on the website have drawn some nice comments from the Hollywood A-list.

Mary McDonnell was impressed with her position on my Best Dressed Women in Space article.

…and Amy Shiels like my story, which is neat.

Reminiscing about my time in Belize drew the attention of the Belize Tourist Board.

I’ve had some decent feedback on my Taste of Cinema articles, too.

Not everyone is that complimentary of course.

After my Twin Peaks article, I was invited onto the Obnoxious and Anonymous channel on YouTube, one of the biggest Twin Peaks shows out there, and had some nice feedback about that, too.

These are a few of my favourite comments from this website since I started it.  Thanks to everyone who’s taken the time to comment on what I’ve written.

As I’m a teacher, I get valuable feedback from children sometimes too.

“Is that your wife, Mr Austin? She’s a bit out of your league, isn’t she?” Nice.

Mr Austin, your nose is crooked.” Thanks.

What about the book?

One of the most important things I’m after feedback for at the minute is The Crossing. Here’s what some people have said about it so far…

“I really enjoyed reading your book – it gripped me from the start and I am serious that I couldn’t put it down. The characters come to life so easily, in fact that was one of the wonderful things about your narrative – how I could visualise the story from your words. I loved the bit where *******spoilers******** and even though in some ways that is almost a cliché in terms of space stories, it seriously moved me to tears!”

“You’ve written a fantastic story, with the feel of a beginning. I hope this is the start of a series, and that you’ll allow me to read other stories as they become available.

Your characters are vivid, believable, and show growth and progression along their arcs. I wouldn’t change a thing about any of them. The same is true for your settings. Well done.

The plot is action-packed without any unnecessary action or scenes; everything contributes to the story and moves the plot forward.”

There was a creepy tension throughout the first half of the book that I really liked. And after that, things just kept getting more surprising and dire. I was gripped until the very end. I feel like all of the characters and their actions and thought processes were very believable, and your descriptions were very crisp and clear. “

“I finished your novel yesterday! It was a smooth read overall with a lot of nice ups and downs (I like when authors keep throwing problems at the characters, and aren’t afraid to hurt them). The ensemble cast felt nicely handled, with a good mix of personalities, genders, and ethnicities. Paul is a kind, likable protagonist throughout, and the first section felt very much like it fit his age.”

So, that’s some nice stuff to read about your work.

It’s so lovely when you get good feedback from people.  To collect it up here in one place has made me feel brilliant.  It gives me a great sense of self-worth when I see it all and it doubles my conviction to keep writing and trying to be creative.  It also makes me want to go and tell other people all the good stuff that they do.  I know how it makes me feel, so why not spread that out to others.

Thanks for reading, only Z to go.  If you’ve enjoyed this, then please check out my other entries in the Blogging from A-Z Challenge.

V is for Vampires (and Val)

W is for Writing

3 thoughts on “Y is for Your Feedback”