It’s been a bit of a while since I did one of these but I’m off to Steventon on Sunday for the Blake’s 7 Charity event (where I get to meet Paul Darrow, Michael Keating and Stephen Greif – Yay!!!) and thought I’d get myself in the mood by doing another episode.

We open with some headshots of the crew floating in space followed by Blake drinking what looks like Alka Seltzer being told by Callie about the source of his headaches, Vila’s stomach cramps and Avon’s back pain – stress. They all need a rest! Enter Avon in silver costume and a magnificent belt that wouldn’t be out of place around the waist of a Hell’s Angel. Basically, they’ve been on the run for a long time and they’re all feeling the effects.

Incidentally, I must have stolen my headache face from Gareth Thomas. As they’re arguing about it, they realise that they’re about to smash into a Federation freighter (which looks just like a Federation Prison ship). They wonder where its going. In fact, Avon asks, “Where the hell is it going?” This puts me in mind of a question.  This was early evening TV, right.  I wonder how common it was back then for people to say ‘hell’ in a program aired at this time? I know that you couldn’t say it at all on US Network television until the 60’s. It found it’s way into the end of the Star Trek episode, City on the Edge of Forever. I can’t imagine it was that common back when this was first shown.

Blake wants to follow it, making Avon and the rest of them sorry that they even saw the thing. It’s heading to a planet called Horizon, which is visited annually by the Federation for some unknown reason. There is no other information about the place. Avon doesn’t see the point of going after it but Blake’s mind is made up (not a democracy, people!).

Meanwhile, Gan is with ORAC trying to learn something (Look, it’s trying to think – Albert Rosenfield – sorry, my mind has been consumed by Twin Peaks for the past few weeks).

Back on the bridge, they notice the freighter pass through some sort of energy shield. Rather than hang back, Blake insists on going straight through it too with blind faith in the shields. Sure enough, this dodgy call leads to the Liberator being zapped by a special effect which makes all the characters look like pencil sketches of themselves. They pass through safely enough although Vila is left with more pain to add to his stomach cramps. 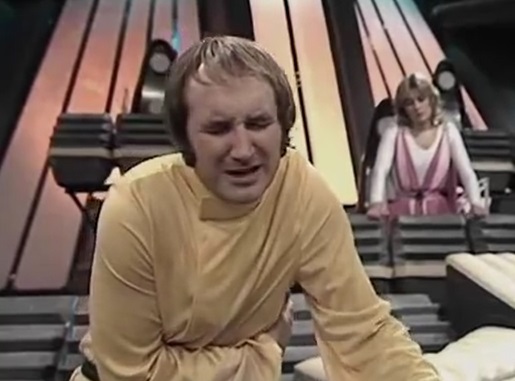 Cally gives him a shot that sorts him out and, to Avon’s amusement, knocks him out. They observe the freighter until it lands and then Blake decides to go down with Jenna. He’s got some idea of using the planet as a possible base for the Resistance. he’s taking Jenna because he knows that Avon won’t leg it if he hasn’t got a good enough pilot on board. Too bad he doesn’t notice Avon listening in to his rationale from the other side of the room.  Our fearless leader needs to pay attention to his peripherals!

So, time for them to teleport down to… a land of rocky-ness, vegetation that looks like seaweed and some dry ice. Hold the seaweed – that looks more like just fake, plastic vegetation.

As they move off, we cut to an inhabitant of Horizon who is watching them on a projector. He looks like an officious type – I’m going to hang an onion out there and say that he’s probably evil. Yeah, it doesn’t take a few seconds before he is shown to be a Federation company man who’s straight on the horn to a stormtrooper dishing out orders to “take them.” That can’t be good!  Oh, wait, hang on a second – the stormtrooper has something else with him. I didn’t get a good look at it but it’s worth a rewind. No, still can’t see it properly. It’ll have to wait.

False alarm – I thought it was some kind of wookie. Turns out it’s just someone in a head-dress. Blake and Jenna are just investigating what they assume to be some sort of mining operation when they are blow-darted into unconsciousness.

Meanwhile on the Liberator, Vila is kicking back with a large glass of crème de menthe

It’s just a vitamin solution really, but he seems out of it anyway, still enjoying the effects of the shot he got from Cally. Avon calls him a ‘fifth-grade ignorant’ and then, when they’re deciding who should go down and rescue Blake and Jenna after they figure out they’re in trouble, he gives us the classic – “I’m not expendable, I’m not stupid and I’m not going.”

On the planet, Blake and Jenna are strapped to tables being watched by the officious one from before, who we learn is called Ro and who counts himself as ruler of the planet. Jenna blurts out Blake’s name when she wakes up but it’s OK. Ro doesn’t seem to flinch at it. Maybe he didn’t get the memo. He figures out that Blake and Jenna are Resistance and then we cut to two more people in similar outfits to Ro who proceed to give us some exposition. One is his former teacher but there’s an odd relationship there.

Gan and Vila arrive on the planet and then we cut back to Blake and Jenna who are being interrogated using some sort of sensory barrage that makes it look like they’re inside a game of laser tag – all green and red and loud sirens. It’s the teacher doing the interrogating. He’s ready to damage Jenna permanently to get Blake to talk and then Ro intervenes, seemingly cowed by the needless cruelty. He is told that it is his decision and he loses his nerve and lets them get on with it. The teacher turns on the lights again and it’s double intensity.

Gan and Vila get hit by blowdarts and incapacitated. Good rescue, people.

Blake agrees to talk but only to Ro. He appeals to the man who, as it turns out does not actually work for the Federation but is merely their supplier of the ore that is being mined. It’s for inter-galactic travel and when Blake hears what it is (Monopasium 239!!!) he says it’s no wonder the miners die. It’s OK though, because Ro says they’re just primitives who work in the mines. You can see there are seeds of doubt in his mind. Maybe he’s not all bad after all. Turns out he is one of the indigenous people. The teacher is a member of the Federation who has trained him to sell out his own people and become their lackey. I got confused, I think, because Ro and his teacher are wearing the same clothes. It makes them seem like they are both from the same background. This makes a lot more sense now.

Blake sets Ro straight on a few things about the Federation and then Jenna wakes up. The teacher comes back with the news that Gan and Vila have been taken. He then tells Ro to put Blake and Jenna to work in the mines digging for the Shankara Stones or whatever. Perfect. Don’t kill them. Put them in with a bunch of disaffected slaves so they can instigate an uprising. Nice going, teacher!

Ro gets busted looking at a woman in the mines (my money’s on childhood sweetheart). There ensues a brilliant bit of conversation about Vila. He confessed everything immediately but doesn’t know enough about the Liberator systems to help his captors. They decide to put him to work also as he’s never done any. His reaction is quality.

Not many people left on the Liberator now. Avon and Cally are quizzing ORAC about things. Avon wants to run but Cally wants to go down. Down she goes!

She keeps in contact with Avon for a bit but then she goes off grid too and he decides it’s time to leave. Ah, bless. He does seem really sad when she doesn’t respond. Like he’s lost all his friends, even if he’d never admit that they were friends. Still, he’s going to leave, isn’t he?

Cally has been captured and is talking to the teacher. She knows he’s the man who killed Ro’s father. Oh dear. Captured one too many people? Cally gets to use her psychic powers for something cool at last. She’s all over their minds like a Bene Gesserit truthsayer! Go Cally!!

After some discussion, we find out that the teacher knows exactly who Blake and the other are and is after the reward for them and Liberator. He’s not reporting any of this to central command because he wants it all to himself.

Blake and Vila are topless in the mines, breaking up rocks. Blake finds a security camera and asks to speak to the teacher (I don’t know why I’m still calling him a teacher by the way. His title is Commissar).

Up on the Liberator, Avon is wrestling with the idea of getting out. He knows he can be safe if he leaves and he can operate the ship with ORAC’s help, stay out of everyone’s way and just cruise indefinitely.

Blake’s meeting with the Commissar and threatens to have the Liberator destroy their freighter when they try to leave if he doesn’t let the others go. He’s offering himself up as a bargaining chip. Ro says he’ll think about it.

Speaking of thinking about it, Avon’s got to make a decision. The people on the planet have sent a message about his location out and the pursuit ships are responding. if he’s going to go, it has to be now. He’s not going anywhere, though; just down to the planet to be a Big Damn Hero!

He takes out half the Federation soldiers single-handedly and then almost kills Blake. We can assume he wasn’t trying! They all teleport back to the ship. Winner!

Meanwhile, Ro is at a crisis point. The Commissar is demanding that he gets rid of his sweetheart or interrogates her(I know, I’ve missed out a load about her). He tortures her in front of Ro, who is struggling, He’s going to do a Vader soon and turn on his boss, I can feel it. There is good in you, Ro!

Yep, Blake goes back down and walks into the middle of Ro going back to his native roots. He’s got his traditional outfit back on and has the dead-eye stare of a man who’s been pushed too far. He blowdarts the Commissar with death serum. Can’t say he deserves anything less.

Blake leaves them to it and, after a final bit of drama with some pursuit ships, that’s the end of the episode.

Thanks for reading. If this was of any interest to you, you might check out my other rewatches here:

There are links to my bits on season 1 in there somewhere. Meanwhile, I’ll look forward to seeing any of you who are going to be in Steventon on Sunday. Can’t wait!