So, here I am, back on the Blake’s 7 odyssey and straight into Season 2.  It’s been a while but I couldn’t resist any longer.  This is easier than editing my book.

We open with a  picture of what looks like strange galaxies and then cut to the Liberator flying past an angle-poised lamp.  Inside, Blake sounds just as hacked off as he did at the end of Season 1.  He’s talking to Zen, getting him to do something that it seems like they’ve before – watching the Liberator explode per ORAC’s prediction.  Cally’s had her hair done and Gan’s wearing a cloak that makes him look like he’s been hanging out at Hogwarts.

Avon, like a teenager who’s sick of watching his little sister watch cartoons all day, wants to use the computer to do something more constructive.  He’s so cool.  He knows what Blake’s looking for but is just letting him fumble about after it rather than tell him. 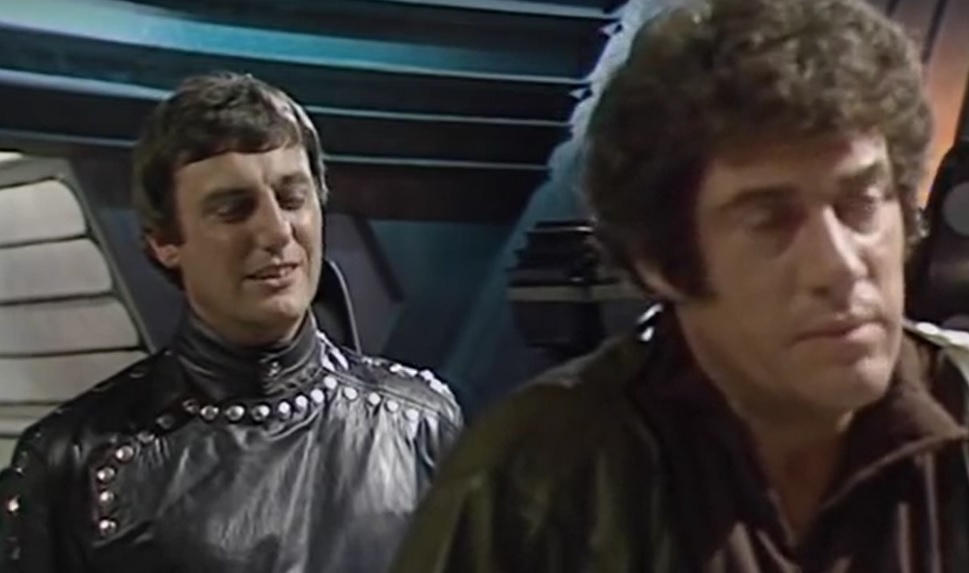 Look how smug he is.  Fantastic.  He’s known this for hours.

I have to take a moment here to pay homage to Blake’s sleeves.  They are absolutely immense.  Not a moment to lose, however.  Neutron blasters strike the ship from somewhere and Blake orders a hasty retreat.  All hands to the pumps as two ships are in hot pursuit.  they’re not the Federation so who could they be?  The liberator dives into the orbit of a nearby planet to try to evade them but it’s not working.  Also, none of the other protective systems seem to be working and the two ships are free to blast away with impunity whilst speaking in some computer language.  I don’t remember this episode.  Something tells me that the two ships are of the same design as the Liberator.  In any case, they buy some time but the ship is running on full power, draining the energy banks, and nothing else seems to be working.  They’re going to have to fix everything without Zen’s help.  Blake gives out some instructions to Vila and then gets a classic line out of Avon when he tells him all the things he has to do.

“Is that all?  What shall I do with the other hand?”

I’m sorry, this is turning into an Avon love-fest but he follows up with another piece of brilliance when Vila tells him he needs something for a headache.

“Have you considered amputation?”

The ships should have destroyed the Liberator.  Why didn’t they?  They’re heading somewhere and Avon thinks it’s somewhere particular.

We now cut to that somewhere – a space station of some kind, manned by these people.

A picture tells a thousand words.  I’ll only draw attention to the plastic bibs/shoulder pads.  Why?

Back on the Liberator, Blake manages to fix something (kind of), then gets frustrated and walks off only to have it unfix itself and then blow up as he leaves the room.  He makes the mistake of going back to it and is then trapped in the room and menaced with a sparking cable that seems to move with a mind of it’s own.  I suspect there’s actually a member of the film crew just out of shot holding it and waving it around but I could be wrong.

He calls Avon, who is not happy about this at all,  down to help him.  He tries to break the circuit but it doesn’t work.  I wouldn’t be turning my back on that cable if I were him.  he plants a bomb to distract the cable but gets locked in the room after Blake escapes.  Fortunately the explosion that he’s trying desperately to avoid does him no damage whatsoever and he is free to jump out  when the door releases.

The ship is a living entity and is defending itself and making the crew simply passengers as it makes its way to its destination.

Gan is in the teleport section – I thought they were going to stay away from there (he must not have received the memo) – and is overpowered by some of those things in black from before.  the rest of the crew rush off to help him leaving Avon and Jenna on the bridge.  Gan’s gone – and so is the energy supply!

Nothing to do but sit and discuss what’s happened.  Cally’s gone too and Vila.  Blake, Jenna and Avon then try ORAC.  Surprised they haven’t tried this already.  He’s not having it though as he’s busy.  It’s too late anyway as the androids or whatever have turned up on the bridge and are going to take the ship.  Blake asks where the rest of the crew are and gets electrocuted on “force level 3” for his impudence.  Here’s what “force level 3” looks like…

Liberator is guided into the massive space station we saw before and docked.  Blake and the crew are ordered off the ship.  Chief plastic bib-wearer takes a funny look at ORAC which tells me that he’s probably going to save the day in about fifteen minutes.

The crew are marched through the corridors of the space station until Blake is ordered to be separated for interrogation while the rest of them wait to be terminated.  Blake gets “force level 5” for asking another question, which actually looks more comfortable than “force level 3″…

Avon and Jenna inspect their cell but have no way out.  They’re not the only people here though.  Some random slave-types are carrying a pipe for some reason and Blake stops to help one of them before being delivered for interrogation by “The system”.

We find out the true name of the Liberator at this point.  They call it Deep Space Vehicle 2.  catchy.  I think I prefer Liberator.  Blake tells them all about how he came to be in possession of the ship but then the interview is interrupted by an “outside influence” affecting the system.  Could this be ORAC flexing his muscles?

Jenna and Avon are still waiting in their cell.  Jenna suggests they chew their way out.  Personally, I think Kurt Russell delivered that line much better in Big Trouble in Little China but it’s still funny.  Avon glances out of the window and notices that they’re in exactly the sector in which ORAC predicted the Liberator would be destroyed.  I’m going to make a bold prediction here, and I honestly can’t remember.  I’m going to say that what ORAC showed them was actually Deep Space Vehicle 1 being destroyed, not Liberator.  Let’s see if I’m right.

The system is having some major problems and orders all the prisoners to be executed immediately.  Blake is marched off to a big room and we see some bodies of slaves being dragged about and put into a pile.  Grim!  Blake seizes his opportunity and stiff arms the two guards flanking him.  He sees to them with ease, disarms the android bib-wearer and uses it to shoot a guard above him.  We’re treated to the amazing sight of a dummy being thrown over a balcony ( I love dummies falling)

He’s then rescued by another slave (the one he helped) who agrees to take him to the detention area to rescue the crew.  Turns out that the system is kind of like Skynet.  It developed its own intelligence and took over the three worlds around it.

Blake’s too late to release Avon and Jenna as Vila’s already done the job himself.  the whole crew minus Blake join up and escape the guards.  Gan takes on three of them by himself and they’re about free when they run into superior firepower and are subdued.  Just as they’re about to be executed, Blake and his slave buddy save them.  If this were a Fighting Fantasy gamebook, this would be the point when you felt mightily glad that you stopped to help that dude with the pipe.  He’s turned out to be very useful indeed, then he gets killed.  Well, let’s face it, he was never going to make it out of the episode.  Blake’s 8 doesn’t sound nearly as good.

Back on the Liberator, Zen is working again and they make an escape.  Watching the rear view scanner, we get some stock footage taken from an airplane taking off at night (I wonder if those lights are Heathrow) as Liberator blasts its way out of the station.  Zen tells them they’re not alone, however.  Another ship has been launched!  Was I right?  Is it Deep Space Vehicle 1.  I swear I do not remember this from last time I watched.   There’s no other earthly reason to call a ship Deep Space Vehicle 2.

Yay! I was right.  It’s the Liberator’s sister ship and its about to blow them out of the sky.  But then, boom!!!  She explodes courtesy of ORAC.  The prediction comes true.

So, we’re all safe then.  Blake can now concentrate on getting back to his vendetta (sorry, mission).  he puts Avon in his place and sets course for Earth.

This was a solid start to Season 2.  Lots of action, lots of Avon’s cutting remarks, a dummy falling from a high railing,. and an interesting look at the origins of Liberator.  I have to point out the fact that, as the ship was designed by a computer to be operated by androids, there is no need for chairs and living quarters.  That’s just pedantry though.  I really enjoyed this episode.  Looking forward to the rest of Season 2.

Check out the season 1 finale rewatch here if you missed it.