After living in the South for 27 years, I finally got around to visiting this famous location just outside Woking. For those of you who don’t know, Horsell Common is the place where the Martians land in HG Wells’ classic novel, The War of the Worlds. That story has been one of my favourites since childhood, although I had never actually read the book until very recently. I got the audiobook version, narrated by the wonderful David Tennant and really enjoyed it. I thought I would do a post about my favourite versions of the story and a few pictures of my trip to the original location.

In terms of the story and its various interpretations over the years, I’ll approach them in the order in which I saw them.

As a child, I used to listen to this in the car on long journeys with my parents. Richard Burton’s narration is superb and the music really evokes the feeling of panic and desperation. The songs are wonderful and I still listen to this occasionally, as much to remind myself of childhood as to revisit the story. Listening as a child in the North-East, the locations meant nothing to me. It was only when I was 16 that I ended up living near some of the villages and towns mentioned. Turns out that Wayne’s double album remains a bestseller, having sold over 15 million copies worldwide.

This was my first experience, I think, of a story that is transplanted from one place to another. Instead of Victorian England, the action takes place in California, USA. It’s widely regarded as one of the great science fiction films of the 50s. Besides the location, there are lots of differences with Wells’ original novel. One that I never picked up on until I read the book is the difference in the treatment of religion. Wells treats the curate in the novel as a contemptible figure and there is little hope offered. Nothing like that makes its way into 50s Hollywood. I remember watching the film many times when I was young, probably as a Saturday matinee or something on BBC2. 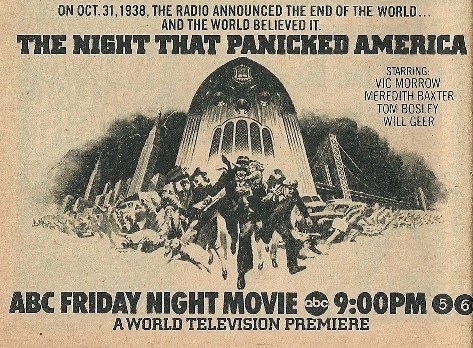 This TV Movie from the 70s tells the story of Orson Welles’ infamous radio broadcast in the 30s. The production was so well done that lots of people tuning in halfway through were convinced that they were listening to the news. I remember walking in on this halfway through while my dad was watching it and being drawn into the story. I sought out the radio broadcast and listened to it. It’s still available on YouTube and well worth a listen if you get the chance.

The updates are interspersed with a big band performance which adds to the dramatic tension. I remember being so excited for this version when it was released. I’m a fan of Steven Spielberg and Tom Cruise; I think my expectations were sky high and I set myself up for a disappointment. First time I saw it I was underwhelmed. I have to say, however, that I enjoy this more and more each time I see it. Cruise plays the hapless father brilliantly and some of the effects are breath-taking. I love the first appearance of the Tripod – it’s a real awe-inspiring moment. Also, the aftermath, when the main character realises that the dust in his hair is the ashes of all the people who were not as lucky as he was.

After seeing all these different versions, I finally got around to reading the book, albeit in audiobook form. I absolutely loved it. It’s such an action-packed story and so dark in tone. There are some genuinely scary moments and the descriptions were brilliant. I always thought that Jeff Wayne’s version stuck closely to the text so it was a surprise to see that this was not the case. Wells lived in Woking at the time and it was during one of his regular walks on Horsell Common that the idea for the story came about (his brother said how strange it would be if aliens were to land and start destroying everything). Invasion literature was quite a thing in the period as we Britons came to terms with the possible end of their empire. Wells was just one of the first to imagine this threat coming from outer space. He took great pleasure in describing the destruction of his neighbours and the local area. This quote came from a letter he wrote to a friend…

“I’m doing the dearest little serial for Pearson’s new magazine, in which I completely wreck and sack Woking – killing my neighbours in painful and eccentric ways – then proceed via Kingston and Richmond to London, which I sack, selecting South Kensington for feats of peculiar atrocity.”

So, with all the versions of the story that I’ve seen, you can imagine why I found it alluring to go to Horsell Common and see for myself. The area of the common is known as the sandpit. that’s how I sold it to the boy so he thought he was going to an actual sandpit. As it happens, there’s only a thin layer of quite tough sand which he couldn’t dig into very much.

He was not amused and it took a while to convince him that the trip was going to be worthwhile. No amount of “Can you see any aliens?” was making him interested. the girl is too young to care so she was happy just wandering around.

It’s only when I saw some shelter building stuff that I managed to get the boy interested.

We played around with logs for a while and then made some animals using pine cones, then we went home. We didn’t see any aliens.

You can check out some of my other random day trips by following the links below.

A trip to Wings and Wheels (Father’s Day Special)

A Trip to the RAF Museum, Hendon

Haiku-ing at the National Gallery

2 thoughts on “A Trip to Horsell Common”