I wrote an article a while back about Cameron Cloutier at the Obnoxious and Anonymous Channel. He’s been trying to raise money through a crowdfunding project to make a Twin Peaks Fan Film. You can see all the details and donate at the link below. I’ve already written about it and there are links to all that at the bottom.

It’s a really exciting project and Cameron has an encyclopaedic knowledge of the show which makes him the ideal person to attempt it. He’s gone to extraordinary lengths to gain attention for his project, which has attracted support from all over the twitterverse, even from stars of the show including Chrysta Bell, Mary Reber, Jake Wardle, Jay Aaseng and Lisa Coronado. 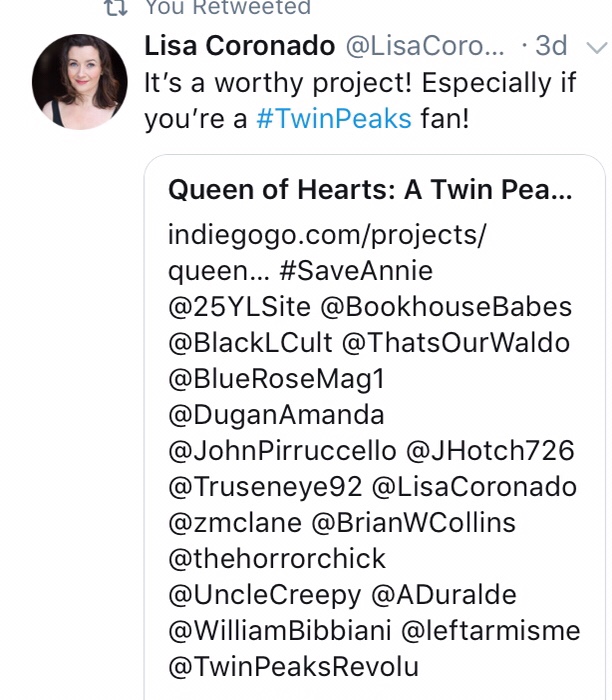 Why am I talking about this? Well, it’s like this.  I love to see people who are reaching out for their dreams; people who try everything to try to make things happen. That’s exactly what Cameron has been doing. He’s doing regular shows on his YouTube Channel to promote the indiegogo campaign, he’s attracting a whole host of guests  from the show who are giving their time to talk in depth about their experiences. He even did an 18 hour live stream ‘telethon’ kind of thing to try to raise funds.

So far, he’s been very successful, raising over $15,000 of funding; 60% of his goal. That’s not the end, however. If the project is going to succeed, there’s another $10,000 to go. He’s managed to extend the deadline but there’s under two weeks to go.  If he doesn’t raise it all, it all goes back to where it came from.

It’s a nice feeling to give someone a hand in doing the things that they want. If you’re a Twin Peaks fan, or even if you just want the satisfaction of giving someone a leg up to achieving their creative dream, you couldn’t find a more dedicated, passionate person to do it for.

If it’s not for you, just do him a favour and share/retweet this message in case it finds its way to someone who wants to join in. There are special perks on offer for those who are willing to donate. So, here’s the link once more.