Caught this one on Sky last night and I have to say, me and Mrs A thoroughly enjoyed it. It was written by the same guys (Paul Wernick and Rhett Reese) who wrote Deadpool and Zombieland so I was expecting something well-paced and with little padding.  It has a 15 certificate and is well-deserving of that, if not more, given some of the gory sequences.

Let’s be clear from the start; this is not an original idea in any way, shape or form.  It’s about as derivative as they come, borrowing from Quatermass, Alien, Gravity and just about any other space-based creature feature you can name.  However, at least it borrows from the best.  Add to that the fact that it has the stones to end in a really grim way.  The ending reminded me a little of Event Horizon in its tone. It didn’t have the same emotional gut-punch as The Mist (because we weren’t that invested in the characters) but it was along vaguely similar lines.

The action takes place aboard the International Space Station.  Our intrepid crew (which features Ryan Reynolds, Jake Gyllenhall, Rebecca Ferguson and others) arte awaiting the arrival of a probe carrying soil samples it has collected from Mars.  When it arrives (in needlessly dramatic fashion), they discover a single-cell organism in amongst all the dirt. I say the probe arrival is needlessly dramatic as it doesn’t do that much to build up a feeling of identification with the characters.  Yes, we get to see them doing some action things but it doesn’t really give us a sense of who they really are.  I’d much rather see people complaining about bonuses/management/the food like we get at the start of Alien. They spend a little time giving us some exposition about the crew (the paraplegic, the one who hates the Earth so much he chooses to live in perpetuity on the ISS, the one who’s just becoming a father – alright, that was a nauseating cliché I couldn’t quite get past) but never quite enough to get us to care on a level that we might if things had been written differently.

Anyway, this single-cell organism, once reanimated, develops rapidly into a cute, gelatinous wavy thing.  Anyone who’s ever seen or read anything like this before should know that you don’t go poking around, stroking and otherwise playing with otherworldly gelatinous tentacle-looking things.  That only ever ends badly. Life is no different. The cute tentacle quickly crushes, jabs and strangles its way out of containment (rubber gloves, really?). There’s some genuinely creepy body-horror imagery as someone is eaten from the inside out and then the creature (named Calvin by some lucky schoolchild back on Earth) escapes into the main body of the station.

From here, you can guess what happens next. There are multiple attempts to contain and/or destroy the thing that run to the film’s conclusion.

Life is a very fast-paced film with lots of action, good special effects (by Academy Award winning British company Double Negative), a very creepy-looking alien creature and enough nerve-jangling excitement to keep you hooked throughout its tight, 104 minute running time. There was a section prior to the end that felt a bit padded but, other than that, it was ‘all killer, no filler’. The lead actors felt a little underused at times and, as I said before, I didn’t build up a real connection with any of them. Given what the writing team behind this did with Zombieland and Deadpool, I find it surprising that the dialogue wasn’t a little more crackly. That said, the stakes of the film are high enough to keep you going throughout. I really enjoyed this film primarily, I think, because it knows what it is and doesn’t try to be anything more.  It’s riddled with plot holes and the alien creature, described as a carbon-based life form, seems to be completely impervious to anything that should therefore kill it (fire, lack of oxygen, extreme cold etc.) but these things can be ignored in favour of a bit of fun. 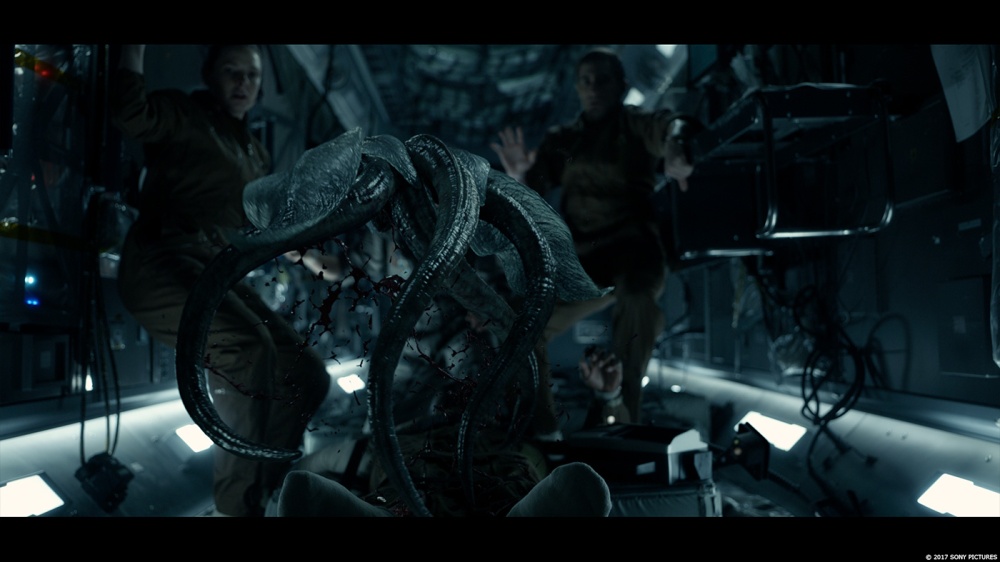 It’s deserving of a much better rating than 6.6, which is what it currently shows on iMDb.  I’d say it should be over 7 without a doubt. There was a rumour circulating that this was a prequel to next year’s Tom Hardy film, Venom, however that seems to have been laid to rest now.

So, would I go back and watch it again?  Probably not. It’s not Alien and it’s not Sunshine. However, as a piece of entertainment for a Sunday night, I’d say it was well worth a watch.

If you’re interested in learning more about the visual effects in the film, there’s a great interview here with the VFX supervisor Huw Evans.