I just finished watching 11.22.63, a very impressive show starring James Franco, all about someone travelling back in time to try to prevent the assassination of John F Kennedy.  I didn’t have very much in the way of expectation for this but found myself more and more engrossed in the premise and how it was executed.

That made me think of other time travel narratives and their patterns.  Do they all fit into the same mould or are there differences?  The main premise I came up with, which runs through the entire sub-genre, was putting right things which had gone wrong in the past.  This could be either through the following:

b) attempting to change the existing status quo by deliberately altering past events.

Accidental or deliberate, every story seems to be concerned with maintaining or improving present or future by changing the past.

I decided to take ten stories as a sample to see if they would all fit one of these patterns.  Some of these are my favourites but this isn’t about making a list; merely an investigation of some of the stories that have been told.  When I spoke to my brother about this, for instance, he listed Planet of the Apes as a time travel story but I didn’t know whether it counts.  It’s not specifically time travel, more someone who is just away for a long time discovering the future as it has turned out; not necessarily in a position to change anything.

Premise – Something has gone wrong in the past and the main character is sent back in order to prevent it.

The idea here is that a virus has wiped out masses of the Earth’s population.  The survivors are forced to live underground, sending people back in time to gather evidence about how the virus developed.  James Cole’s frantic efforts to avert a global disaster lead to him crossing his own timeline (and performing some ad hoc dentistry on himself)  This is one of my favourite Bruce Willis performances, the other one being Unbreakable, probably because he doesn’t play Bruce Willis.  Director Terry Gilliam gave him a list of his trademark looks and gestures and told him he wasn’t allowed to use any of them.  Willis also did the film for free, claiming no money until it was released.  Indeed, most of the actors involved took reduced fees for the chance to work with Gilliam.

As a time travel story, it works very well.  You need anchors in stories like this to keep the audience or reader grounded: characters who appear in different times on their own unchanged timeline to interact with the main character during their journey.  Madeleine Stowe and Brad Pitt offer very different examples of this.

Doctor Who – Genesis of the Daleks

Premise – main character has the chance to create a new, potentially far safer future by altering past events.

The first of two very different Doctor Who stories on the list, here we have Tom Baker given the chance to destroy the Daleks before they are even created.  This is the dilemma of the time traveller in some of these narratives: do we have the right to change things?  In this case it is made especially troublesome as it means saving millions of lives but at the high ethical cost of aborting the existence of an entire race.

Premise – Main character is shown the past and future in order to convince him to change his actions in the present and make a new, better future.

Charles Dickens, through his tale of Ebeneezer Scrooge, gives us the first ever (to my knowledge) alternate timeline story.  Scrooge is taken back to look at his happier past and given a vision of what the future holds if he persists in his ways.  This is slightly different in some ways as Scrooge is only an observer, impotent to change anything except in the present day.

Premise – Main character explores the future and sees the path of human existence, returning with information about how human society will evolve but probably unable to affect any change.

The great granddaddy of time travel stories.  HG Wells’ vision is one of the future of mankind.  The unnamed, Richmond-dwelling time traveller moves further and further into the future, up to the year 802701, where he sees what has become of the human race.  In deleted text from the original novel, restored in some new editions, he goes even further and sees humans evolved into small, furry kangaroo-like creatures.  This story, like A Christmas Carol, presents the protagonist as a kind of observer rather than an agent of change.  As he travels to the future and interacts, he does undoubtedly cause change, but only to a further future which he and the reader have never experienced.

Back to the Future 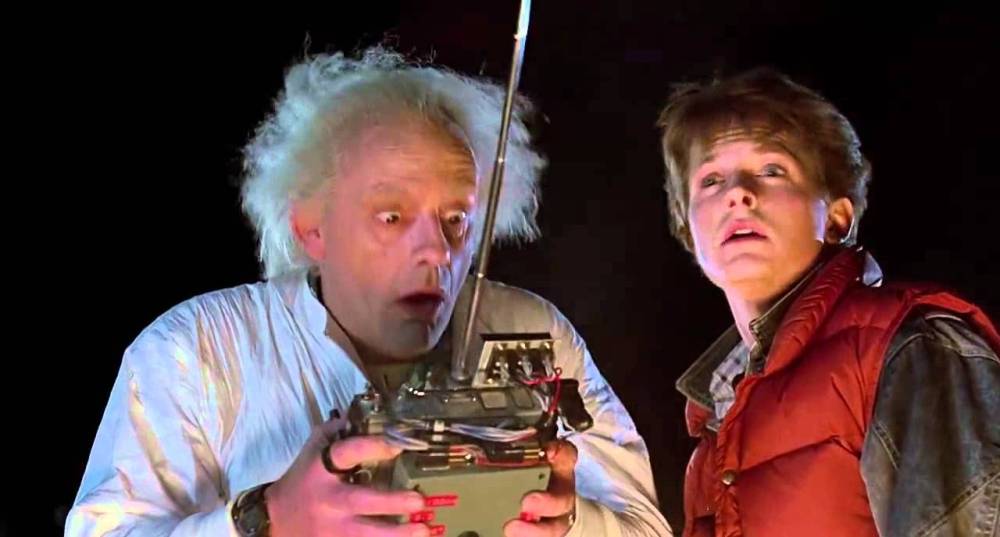 Premise – Something goes wrong in the past due to the actions of the main character and he tries to change it in order to restore the status quo.  Also, something happens in the present and he attempts to put it right through his actions in the past.

Dilemmas and constants, just as with the examples given before.  Doc Brown, Biff and Strickland all give us (and Marty) a constant reference point.  Inadvertently altering something which leads to his own impending non-existence makes for quite a desperate situation.  It’s nice that the stakes are so high for the main character.  The dilemmas here are about how much right we have to interfere with our own futures.  All in all, it’s hard to find anything wrong with this story.

Doctor Who – Girl in the Fireplace

Premise – Main character experiences key events in the life of another, existing as a recurring presence in her life.

I like a doomed love story.  Everything from David Tennant’s acting to the Murray Gold’s score makes for an emotional rollercoaster ride.  The last time he ducks through the fireplace, you just know it’s not going to turn out as expected.  There’s no dilemma here, just a love story.  I can’t tell which character I’d call the constant in the story.  Both the Doctor and Madame du Pompadour fulfil the role of constant for each other.

Star Trek (The Original Series) – City on the Edge of Forever

Premise – Something goes wrong in the past due to the actions of a main character and others try to change it in order to restore the status quo.

Very similar to Back to the Future in terms of the premise, although this one has a much less happy ending.  I don’t want to go into too much detail about this one as I talked about it in my previous post about Star Trek.  Suffice to say that the main theme running through the episode is the dilemma of the time travellers.  What do we have the right to change?

Premise – Main characters experiment with time travel in order to improve their lives and prosperity but eventually create twisted timelines and uncertainty (especially in me).

The most amazing inventions often happen by accident in very unglamorous surroundings.  That seems to be the message at the start of this film.  The way time travel is handled by the characters is pretty much a realistic view of what might happen in such circumstances.  One sees the dilemma and worries whilst the other doesn’t seem to care. The short periods of time which they travel (six hours) also mean it is very difficult to find constants to hang on to.   No-one knows who they’re looking at.  Pat Abe or future Abe?  One of the most confusing films I have ever seen. 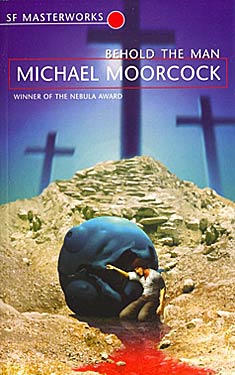 Premise – Main character finds himself in the past and is convinced to take charge of events in order to maintain the status quo.

Michael Moorcock’s novel gives us almost the ultimate dilemma.  I can’t recommend this book highly enough.  The time traveller finds himself in Palestine, 28AD, where he meets numerous Biblical figures of the time.  He discovers a Jesus who is nothing like he should be so he decides to take on the role himself, even going so far as to allow himself to be crucified to maintain the illusion. 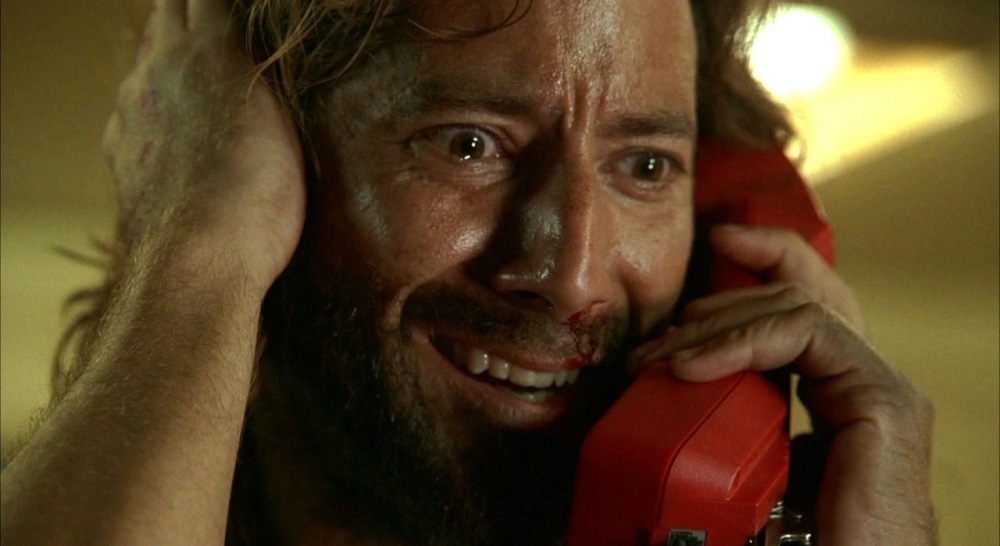 Premise – main character needs to put events right in the past to create balance in his present.

This is my favourite episode of Lost.  Desmond was always one of my favourite characters and this one reduces me to tears every time I watch it.  With all I’ve written about constants, here is a story which presents the absolute need of the time traveller to have one in order to survive.  Desmond jumps all around his own timeline, desperately seeking some way to connect his present to his past.  Who better than the love of his life, Penny?  When she answers the phone.. oh no, I’m welling up now.