I used to read quite a bit when I was at school.  Not all the time.  Sometimes I flicked through the reading scheme books and said I’d read them when maybe I hadn’t made it all the way through, so that I could move up to a different colour.  It’s not that I couldn’t read them.  It was just that they weren’t me.  I wanted to read stuff that was cool, like The Cagey Bee Byte or Fission Chips by G P Jordan (the MicroKidz series).  The ‘z’ on the end is what makes it cool, you see.  I have absolutely no recollection of what these stories were about.  A group of children solving mysteries having something to do with computers (or whatever passed for computers in 1984).

What else?   Colin Dann’s Animals of Farthing Wood – talking foxes and badgers, Douglas Hill’s Last Legionary Quartet – science fiction that I remember as being epic but, from reading reviews as an adult, actually wasn’t that good.  Whatever, I remember it as being fantastic.  I do remember having an argument with another kid at school (another Richard) about the correct pronunciation of the main character, Keill Randor’s name.  I was firmly in the camp of pronouncing it just like Kyle, why not?  He was convinced it was pronounced Keel.  We never saw eye to eye on that or anything else.

Can I remember any more?  I liked The Tripods by John Christopher when I finally got around to reading them.  Chief amongst all of the books I collected, however, have to be the works of Steve Jackson and Ian Livingstone:  Fighting Fantasy Gamebooks.

The two authors had the idea of coming up with a single-player role-playing game in which you would make decisions and roll dice to determine your fate, moving between numbered sections of a book.  You would roll at the start at the adventure to determine how strong/lucky you were, pick some equipment and be off.  Most of the books were set in the realms of fantasy, mostly set in a created world called Titan.  Some of the titles were set elsewhere: present day, dystopian future; some even in science fiction territory.

On your way through the book, you would make choices about whether to attack people or talk to them, whether to open that chest or leave it, turn right or left.  All your decisions could have a profound effect on your ultimate fate as, in most cases, there was only one way through the book.  Sometimes, even if you made it all the way to the end of the maze, if you hadn’t collected the right stuff along the way, you would be defeated.  Most of the series was written between 1982 and 1995.  Steve Jackson wrote his own standalone series called Sorcery, which was  4 part epic where your decisions in book 1 would have an impact on what chances you had in book 4.

Out of the original series, Starship Traveller was one of my favourites.

The science fiction setting included the ability to fly from one planet to another at your whim.  That wasn’t something you could do anywhere else.  Stories existed as linear things that just happened to you as you followed along.  This was a story that you actually influenced.  This is before the onset of video games as something that was in everybody’s home.  Ultimately, it was the video game industry that led to decreased sales of the books.  There were 59 produced in total, however.  Jackson and Livingstone weren’t the sole creative force in this: they had a number of contributors who chipped in, but their names stand proudly at the top of each book.  Most they did together, some they did individually.

I used to love these books.  Around the age of 9-11 years, I would wait for each new one to be published.  I would usually read them in bed, sometimes with Magic, my cat, sitting with me.  I would get all the dice sorted out and a paper copy of the adventure sheet. 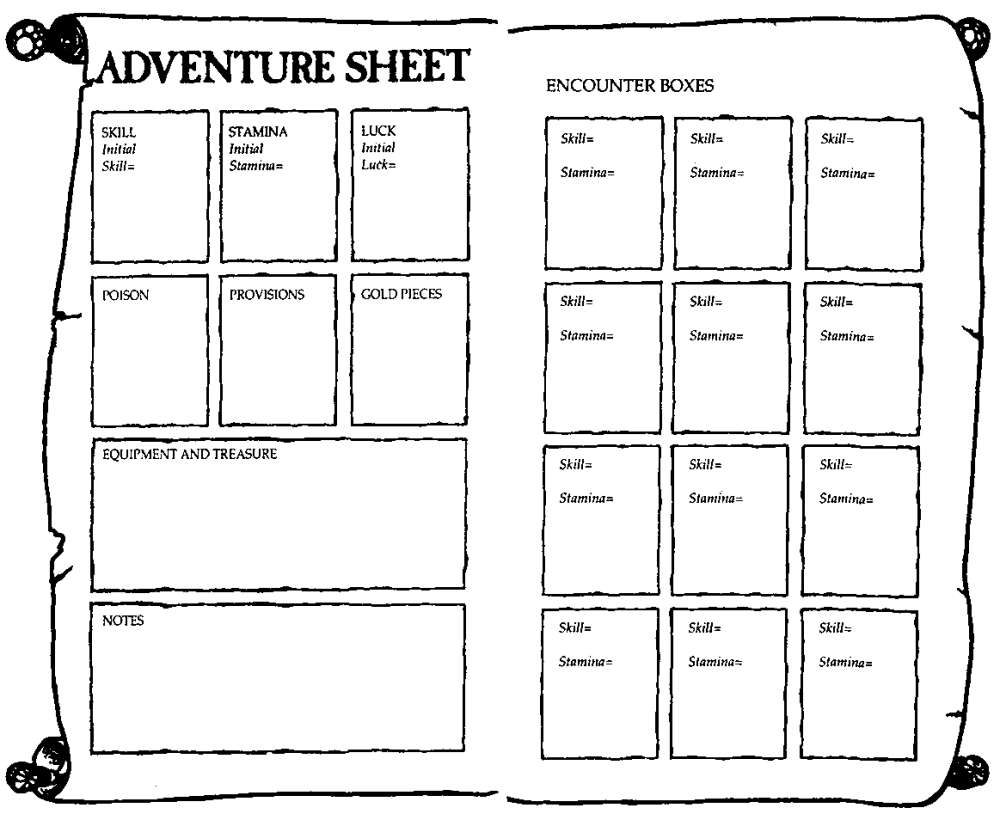 It was here that you recorded all your treasure finds and ‘notes’.  You also recorded your encounters with various monsters and villains.  This involved rolling dice against them and seeing who got the high score.  If you got higher, they lost some strength, until they were dead, or you were.

Anyway, I’d get it all set up and off I’d go.  Of course, each decision carried with it that potential for instant death.  That’s where the cheating started to come in.  Let’s face it.  If you’re playing a computer game these days you make sure you save it before you go into some big round room because you know that you’re going to run into something big and nasty inside and you don’t want to spend the next few hours redoing all the stuff you’ve done just to get you to that big round room.  With Gamebooks, you could flick over to number 345 or whatever and find that opening that left hand cupboard instead of the right hand one had unleashed a swarm of killer bees that would slowly kill you.  Oh no, you’ve forgotten what number you came from, now you’re done for.  Well, the Gamebook equivalent of saving your progress was just to leave a little finger stuck in that page you’d just come from, just in case there was anything lurking up ahead.  If there was, then that wasn’t where you meant to go anywhere sir, now was it?  Absolutely not.  I meant to open the right side of the cupboard.  What kind of idiot would open the left side?

I really loved these books, to the point where I actually attempted to write one.  I’m fairly sure I got about 25% of the way into it; not bad at age 11 or so.  There was a guide book available called Titan, with maps and monsters and ideas.  I used that to flesh out a story and used a big notebook with numbers written all the way through it.  That was my first experience of trying to write a book.

I also tried to pass on my love of these books by feeding them into my year 6 class a few years back.  I managed to create a mini craze for at least a month and we even wrote a truncated version of one as a class (although when we tried a playthrough there were a couple of dead ends – I suppose that’s what happens when you have 30 people working on different bits of the same story).

So, here’s to Ian Livingstone and Steve Jackson.  Thank you for the inspiration your work gave to me as a child.

One thought on “A tribute to Steve Jackson and Ian Livingstone”