I thought I’d repost this as my tribute to Sir Sean, as this was my favourite performance of his. Rest in Peace.

After the disappointment of my viewing of 1981’s Outland the other night, I decided to complete my Sean Connery double bill with a rewatch of one of my favourites of his; one of his several films with director Sidney Lumet. I picked an old copy up off ebay as there is criminally no blu-ray or even a DVD available.

Wanting to put some distance between himself and the role of James Bond in order to avoid typecasting, Connery took on the role of Trooper Roberts in Lumet’s version of Ray Rigby’s screenplay. He was so taken by the opportunity to prove his range that he missed the premiere of Goldfinger in order to start filming it. Roberts is a Sergeant Major convicted of striking a superior officer and is one of five new inmates in a British Army prison camp in North Africa. The five men, all from different backgrounds, are quickly instructed in the cruel disciplinary techniques of the camp’s new staff sergeant, Williams (played by Ian Hendry). Williams is a sadistic brute who, as Connery puts it, “would work as a dustman if they gave him a uniform and a couple of guys to yell at.” He revels in running his charges over the titular hill, a tall mound of sand in the centre of the camp, in the baking hot midday sun.

Williams’ harsh regime leads to tragic consequences, all under the noses of the oblivious camp commandant and its deluded Sergeant Major played by Harry Andrews. The power struggle that ensues plays out as an incredibly intense psychological drama that offers neither redemption nor resolution for any of its characters.

I have always loved this film but this viewing has cemented it as possibly one of my top ten of all time. The drama plays out in the blistering heat of the desert, conditions that made for a gruelling shoot in an old Spanish fort in Malaga during which most of the cast and crew succumbed to diseases like dysentery despite the massive quantities of water which were shipped in to help.

The script is phenomenally good with barely a line wasted. It offers a bleak picture of army discipline alongside institutionalised racism. It never runs into cliche and offers all of the characters a chance to shine. 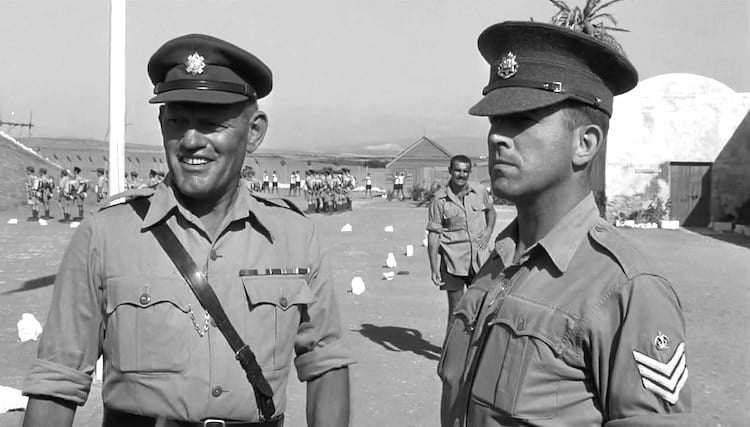 Apart from Lumet and his cast, much credit has to go to Oswald Morris for his wonderful cinematography, for which he received a BAFTA award. There is a claustrophobic feel to nearly every shot, even in the vast parade ground and the use of close-up shots is masterful in showing both the intimidation of the guards and the vulnerability of the prisoners.

It is hard to pick out one particular performance from the cast. Everyone involved is pitch perfect; one of the things that I love so much about my favourite of Lumet’s works, 12 Angry Men. Just the same here, everyone from the five prisoners to the guards and Redgrave’s Medical Officer is on their ‘A’ game. Special praise has to go to Harry Andrews as the Sergeant Major of the camp. His unswerving belief in the King’s Regulations and that he is in control of what is going on is put over brilliantly by Andrews.

This film is terribly under-appreciated and has been since its release. Some critics were put off by the (at the time) ‘lightweight’ Connery in the lead role; such a shame as he really nails his performance.

If you haven’t seen this absolute gem of a film, I highly recommend it. It’s not that easy to find but it’s well worth looking for. You won’t find many films with this intensity and an ensemble cast firing on all cylinders.

Here’s the trailer, which will give you a flavour of what you’re in for.

Thanks for reading. I’m going to move on and make this a triple by watching another of my favourite Lumet/Connery collaborations tomorrow, The Offence.

Check out my other film posts by clicking the links below.

Tonight’s Viewing – Battle Beyond the Stars (1980)